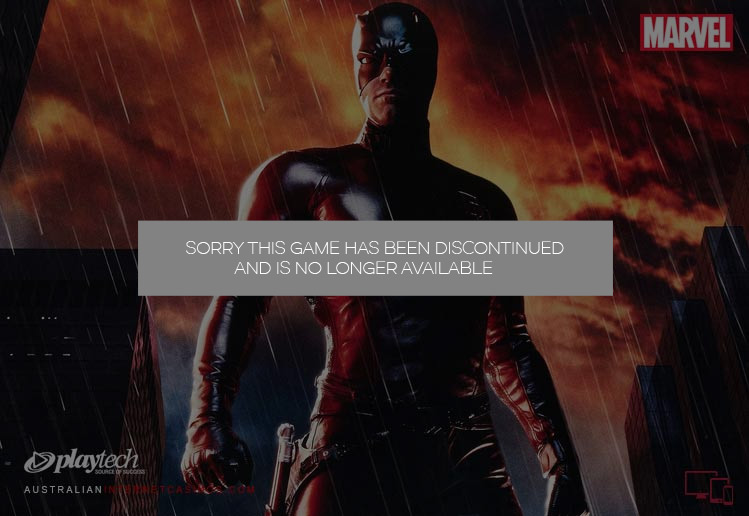 Daredevil pokie is powered by the well known software company Playtech and has 20 paylines with 5 reels. Daredevil has easy to understand features which include free spins and multipliers. Based on the Daredevil comic book and 2003 blockbuster movie starring Ben Affleck as Matt Murdock the Daredevil, Jennifer Garner and Colin Farrell.

Daredevil is a powerful attorney by day and becomes a ruthless vigilante by night. Blinded as a child in a car accident, Daredevil uses his super hero senses to fight crime in the harsh streets of New York City.

About The Bullseye Bonus Game

Land 3 or more Daredevil Logo symbols to trigger The Free Games feature with 10 free spins. Before a spin, places the target sign on one of the 15 reel positions by clicking on the position. When a Bullseye symbol appears under the target then the award will be 3x the total bet.
1. Free Games feature
2. Bullseye Feature

The Daredevil is the Wild symbol which substitutes for all symbols except for the Scatter symbol. Spin 5 Daredevil Wilds across an active payline to win the 5 000-Coin Jackpot!

The Free Games feature is triggered by 3 or more Scatter Daredevil Logo symbols. Receive 10 free spins initially with random Wilds. After each free spin, Daredevil’s radar sense will scan the reels turning symbols into Wild symbols at random – between 0 and 3 symbols will become Wild. More free spins can re-trigger infinitely.

About the Bonus Feature:

Before a spin, place the Bullseye target on one of the 15 reel positions. If a Bullseye symbol appears under the target, 3x the total stake will be awarded. The Bullseye remains in place until you decide to move it around to target other reels.

Daredevil is linked to the 4 Level Progressive Marvel Mystery Jackpot. The 4 Progressive Jackpots to be won are: Power, Extra Power, Super Power and Ultimate Power. These Jackpots are activated at random and offer a guaranteed win.

Once the Jackpot round begins, a grid of 20 squares will appear. This grid hides the symbols of the jackpot levels beneath each square. Click on the squares to reveal the symbols, when 3 three identical symbols are revealed the Jackpot corresponding to that symbol will be won.

Autoplay allows the reels to spin a set amount of times in succession. The Autoplay ends when the reels have completed the predetermined or by clicking Stop.

Where To Daredevil Pokie Game.

You can play Daredevil pokie game at anyone of our recommended Internet casinos below. 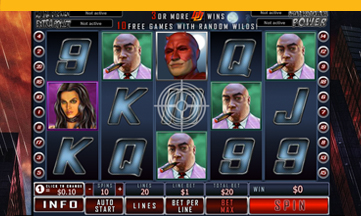 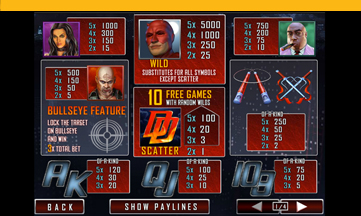 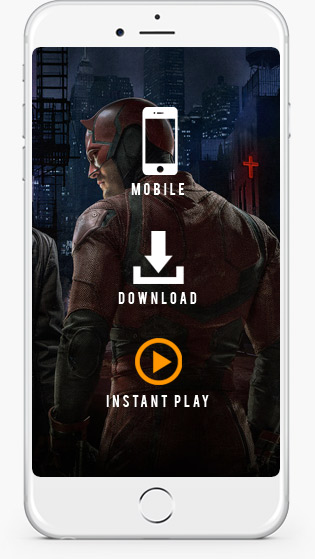