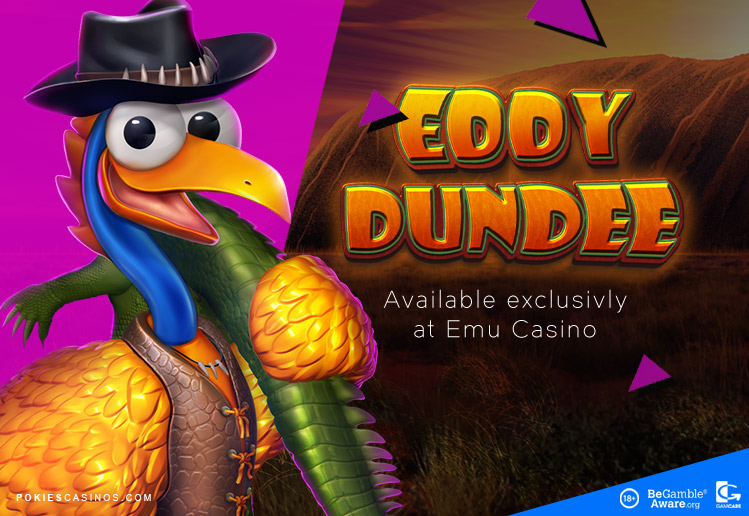 Eddy Dundee is an exclusive slot game only found at Emu Casino who acquired Game Art’s expertise for design and development. Enjoy the Australian outback with a fun filled Emu named Eddy Dundee, who take centre stage in the 5 reels over 3 rows with 25 paylines. To start you off with Eddy Dundee slot we have an exclusive 20 free spins on offer when you sign up with Emu casino.

Prepare to join Eddy Dundee, the protagonist of this pokie on a journey which reveals fantastic features. Before kicking off on your outback adventure, you can enjoy an exclusive 20 No Deposit Free Spins offer to juice you up for the long, hard trek with Eddy Dundee.

As the journey continues with this legendary hero, you will encounter Gigantic Symbols during the Free Spins Feature as well as multiple Jackpots and not forgetting the Bonus Re-Spins Feature which is true to form as it’s what any homebody would say “Now that’s a Big Knife” Bonus.

Gear up and embark on an Outback experience filled with reels and reels of fun.

In the pokie game Eddy Dundee, the low-value symbols are the card royals, K, Q and J. When a player lands five of these symbols they will receive payouts of between 0.50x to 1.00x their stake. The higher paying symbols are a Gorgeous Blonde Woman, Hat, a Fierce Croc and the Eddy Dundee logo.

The Wild Symbol is the Dingo which is rather appropriate as it is the Wild Dog of the Australian Outback. The Dingo substitutes for all the other symbols and can be very helpful in forming winning combos. There are, however, two symbols it cannot substitute for, and those are the Scatter Symbol and the Big Knife.

The Giant Emu, one of the most abundant birds in the world, represents the Scatter Symbol in Eddy Dundee. It triggers the Bonus Round and players receive Free Spins that can be re-triggered, now that’s a bonus Mate!

The Gigantic Symbols Feature is when 2, 3 and 4 spin reels and become linked as one Gigantic Symbol, and this happens during the Free Spins Round. Players will receive three additional Free Spins when the Giant Emu hits the reels. What’s more, there are no restrictions on the number of re-triggers players will be awarded.

To stand any chance at winning the Mega Jackpot, you will need to land 15 Big Knife Symbols.

This pokie also has a Gamble Feature. It allows players to gamble their winnings in a double or nothing type of game. How it works is as follows, you need to guess one of two things correctly, the card suit or the colour. If they get it right, winnings are multiplied. An incorrect choice could see you lose all your winnings and then let’s be honest the journey would have been a waste of time. The flip side to this coin is you can gamble your winnings up to five times before calling it a day.

Eddy Dundee Pokie is based on the blockbuster Crocodile Dundee and just as entertaining. It’s filled with romance, excitement and of course some nice bonus features nit forgetting the 20 Free No Deposit Spins players receive when they sign up at Emu Casino to play this pokie which is exclusive to them. Pack your tog and head into the Outback Mate. The rewards will be endless.

You can play Eddy Dundee pokie game only at Emu Casino 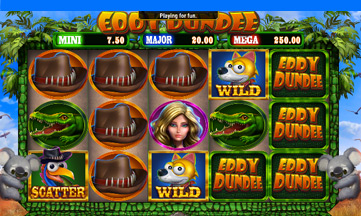 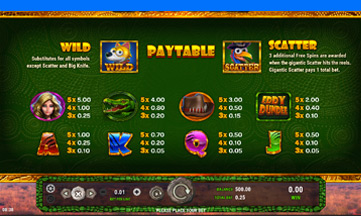 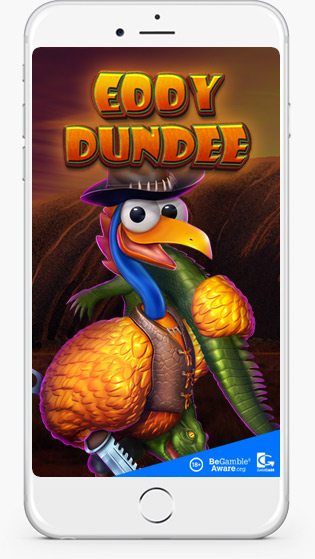