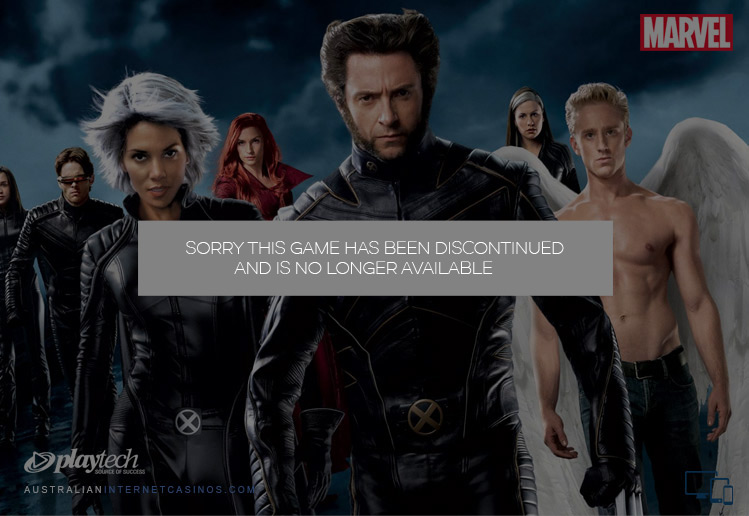 X-Men pokie is powered by the well known software company Playtech and has 25 paylines with 5 reels. The game begins with the super villains inviting players to witness the long standing battle between the good mutants lead by professors X and evil mutants lead by Magneto

Unlike other Playtech Marvel Comics pokies, X-Men does not feature any actual scenes from the movie, but game does have excellent graphics and sound effects.

The shape shifting Mystique is the one to watch as she causes confusion when her image morphs into a different mutant. The Nightcrawler teleports himself to a different location, Storm controls the weather and Cyclops emits red rays from his eyes.

The X-Feature versus a bonus, win 5x the total bet whenever any of the 5 heroes form an “X” shape in the middle of the reels. Scatter symbols award free spins featuring 2 modes of play.

The X Feature comes to play when only Super Heroes occupy the 5 positions forming an X on Reels 2, 3 and 4. The feature pays 5x the total bet. The Free Games feature is triggered when 3 or more Scatter symbols appear on the reels. This game toggles between the Heroes mode and the Villains mode awarding free spins.

WILD is the wild symbol and will appear at random.
The Wild acts as a substitute for any other symbol except the Scatter to create winning combinations. Land 5 Wilds to receive the highest prize of 10 000 coins.

About the X- Feature

This is a unique feature which gives the chance for winnings to be multiplied up to 5 times. When all 5 Super Heroes land on reels 2, 3 and 4, creating the letter X an extra win with five times the total bet will be awarded.
The hero symbols do not need to be identical, should they be identical an extra win will be awarded in addition to the regular line and Scatter wins.

About the Free Games Feature

The Free Games feature will be activated when 3 or more scatter symbols appear on the reels. This game has 2 modes – Heroes and Villains. The Heroes mode has an unlimited amount of spins and the Villains mode has 8 free spins.

The game will begin in the Heroes mode where the Super Heroes and Wild symbols appear. Magneto will appear as an extra wild symbol – should Magneto appear on Reel 3 the game will switch to the Villains mode. The Super Villains and Wild symbol appear in this mode where Xavier appears as an extra wild. If Xavier appears on Reel 3 then the game switches back to the Heroes mode. Whenever the game switches to the Villain mode the count starts from the previous number. Once the 8 spins are over in the Villains mode the Free Games feature will end.

X-Men is linked to the 4 level Mystery Jackpot which is randomly triggered. There is a grid with 20 squares that hide the symbols for the various jackpot levels. Click on the squares to reveal the symbols and jackpot level.

X-Men has an Autoplay where players can enable spin the reels automatically up to 99 times. The Auto feature ends when the reels have all been spun or the player clicks Stop.

Where To Play X-Men Pokie Game.

You can play X-Men pokie game at anyone of our recommended Internet casinos below. 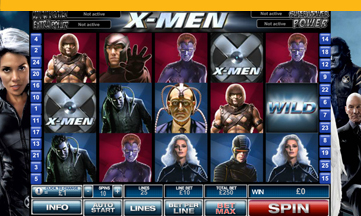 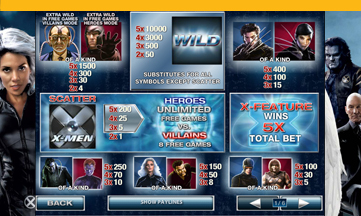 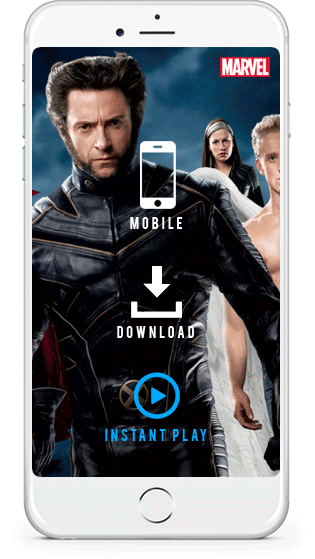