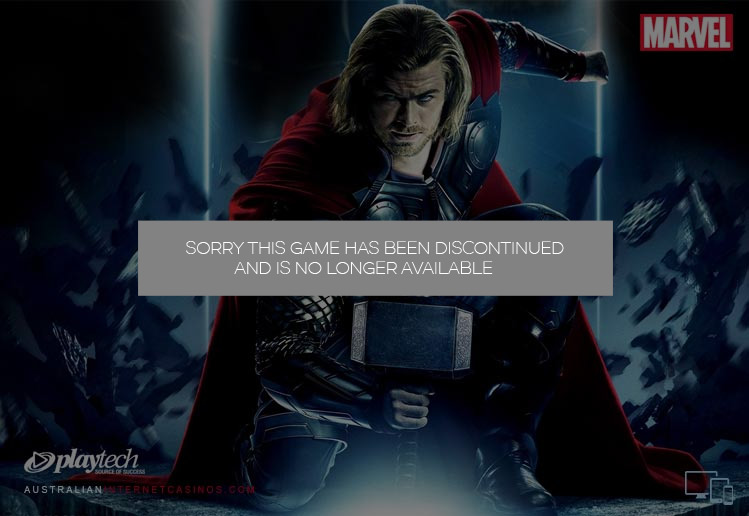 Thor pokie is powered by the renowned software company Playtech and has 30 paylines with 5 reels.

Thor: The Mighty Avenger is based on the recent Thor film where the Mighty Avenger travels to the land of Asgard to seek fortunes from the 9 worlds occupied by Heimdall, Laufey and the Frost Giants. The Thor pokie features 3 modes, 2 being the free spins features. Earn unlimited free spins with frozen winning combinations and burning symbols with a 2x multiplier. The game also has 4 progressive jackpots to be won!

Thor has 3 modes – the default is Asgard and the other 2 modes can be accessed from the Rainbow Bridge feature. During the Asgard mode the wild symbols will appear stacked on reels 2 and 4. A stacked wild on reel 2 triggers the Thunderstorm Re-spin feature. The reel covered in wilds will freeze with 1 re-spin being awarded. Stacked wilds on the 4th reel trigger the Lightning Free Spin feature. The Thor Hammer awards between 2 -5 wilds on the reels with 1 re-spin.

Thor is the Wild symbol and the Gatekeeper is an extra bonus symbol. Thor Wilds form can substitute or other symbols when necessary. If Wild symbols covers the entire 2nd reel the Thunderstorm feature is activated, and when it covers the 4th reel the Lightning feature will be activated.

Thunderstorm is a repeated spin during which the entire 2nd reel is filled with Wild symbols. Lightening is 1 free spin and from 2 – 5 Wilds will randomly appear on the screen.

Thor’s Hammer is the scatter symbol which triggers the Rainbow Bridge bonus game.

Thunderstorm Re-spin Cover all three symbols on reel 2 with Thor to get 1 re-spin while the wild remains in place.

Lightning Free Spin If a stacked Thor symbol covers the entire 4th reel one free spin will be awarded and between 2 and 5 wilds will be placed randomly on the reels.

Rainbow Bridge will be activated by covering the 3rd reel with Heimdall the Gatekeeper symbol. Choose between one of the 2 Orbs to reveal a destination: Earth or Jotunheim. Earn a different type of free spins feature as described below:

Earth – get unlimited free spins until Thor and Gatekeeper symbols appear on the middle reel. The Destroyer symbol appearing on reel 5 will blow fire onto six random symbol positions, each of which continue to burn for up to 4 spins. These symbol positions will then act as multipliers, doubling the winnings when forming winning combinations. Symbols that catch fire will ‘burn’ for up to 4 free spins with a 2x multiplier!

Jotunheim – Thor and the Gatekeeper appear on reel 3 but an Extra Wild is gets added to the reels. If it forms part of a win it freezes the entire winning combination in place providing for a better win on the next spin.

Marvel pokie players are all eligible for the 4-Level Progressive Jackpot system:

Power, Extra Power, and Super Power. The higher the stake the higher are the chances of randomly winning a jackpot! Reveal symbols until matching 3 of a kind to earn one of the 4 jackpots. The Ultimate Power Jackpot can be enormous, sometimes awarding prizes worth more than 1 million!

When the Autoplay feature is selected, the game will continue without interruption. The reels will spin consecutively without needing to manually activate any button.

Where To Play Thor Pokie Game.

You can play Thor pokie game at anyone of our recommended Internet casinos below. 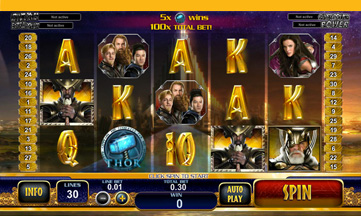 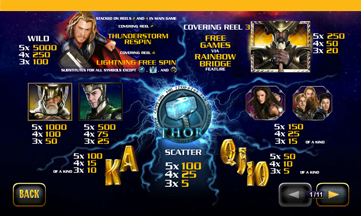 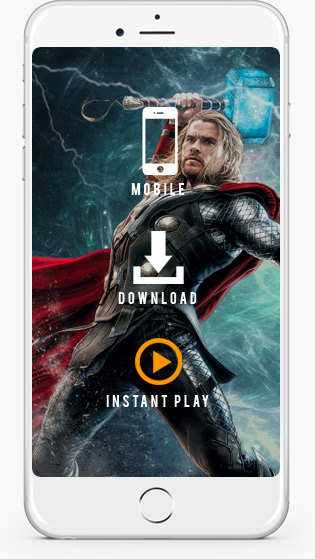