Battle of the Gods Pokie Game 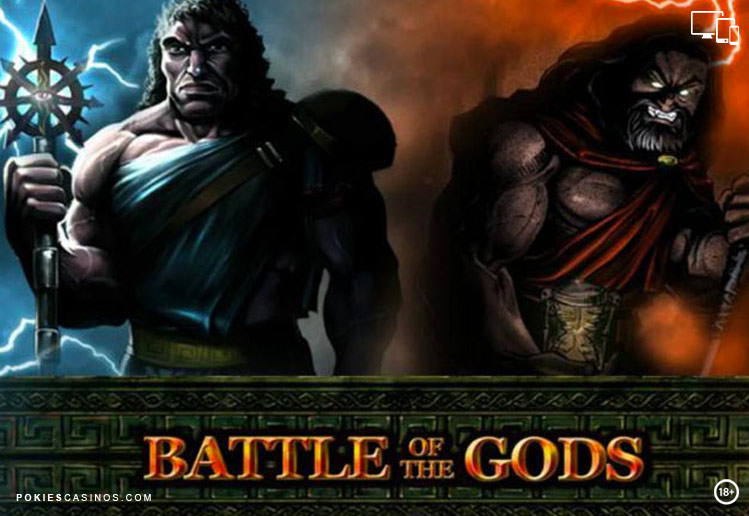 Battle of the Gods Pokie Game

Battle of the Gods

Battle of the Gods Pokie Game by Playtech

ABOUT BATTLE OF THE GODS POKIE GAME

Battle of the Gods pokie is powered by the popular software gaming company Playtech and has 25 paylines with 5 reels.

This pokie is about the battles between the Titans and younger Gods the Olympians. In Greek mythology the Titans were giants with incredible strength and were the first Gods and Goddesses. The Titans were overthrown by the Olympians as the new Gods of the Greeks. The aim is to occupy the Temple of the Gods in an undisputed victory for one of the sides. The graphics, animations, and sound effects are dramatic with lots of action as the powerful Gods go into battle. The game has no 9-10-J-Q-K-A symbols – it is completely made up of picture symbols where the Gods have blue backgrounds and the Titans have brown backgrounds.

This pokie allows punters to select between a Titans mode with 8 free games or a Gods Mode which offers unlimited free games should they keep re-triggering. There is also features an X-Feature rewarding 5x the total bet when only God symbols appear on reels 2, 3, and 4 creating an ‘X’ shape.

The Jackpot Payout is 10,000 coins when 5 Wild symbols line up on an activated payline.

About Battle of the Gods Bonus Games

About Battle of the Gods X-Feature

The X feature is triggered by getting Gods on reels 2, 3 and 4 that form an ‘X’ pattern. Wins will be awarded with a 5x Multiplier.
The X feature, however, is not available in the free games.

The Phoenix is the Wild symbol and it substitutes for all symbols except the scatter symbol. 5 Wilds on an active payline award the 10 000-coin Jackpot! There is also a Stacked Wilds feature during the Free Spins game. The Stacked Wilds can help to win huge payouts, especially by re-triggering the free spins.

The Scatter is the Temple of the Gods symbol, and it activates the Free games:

2 or more Scatter symbols appearing anywhere will award a payout.

5 Scatters anywhere on the reels award 200x the bet!

About the Free Spins Bonus

3 or more Scatters trigger the Free Spins which can play in 2 different modes – Gods and Titans.

The Gods award an unlimited amount of spins – only the Gods, Wilds, and Titan Extra Wild symbols will appear.

The game stays in Gods mode until the Titan extra wild symbol appears on Reel 3.

When this happens, the game switches to the Titans mode which awards only 8 spins.

In Titans mode only the Titans symbols, Wilds, and the God Extra Wild symbols appear.

While in Titans Mode, if the Gods extra wild symbol appears then the game goes back to Gods mode and unlimited free spins.

The game can switch from Gods to Titans and Titan to Gods quite a few times. The Free Spins feature ends when there are no more spins left in Titans mode.

Battle of the Gods has an Auto Play feature where the reels can spin automatically with up to 99 games. There is also a ‘Stop’ button which players can click to stop the reels from spinning giving players more control of the game.

Where To Play Battle of the Gods Pokie Game.

You can play Battle of the Gods pokie game at one of our recommended Playtech Internet casinos below.

Battle of the Gods Preview Screen 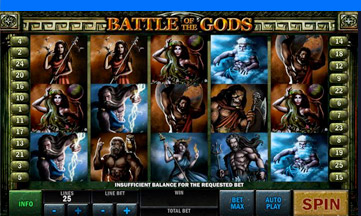 Battle of the Gods Pay Screen 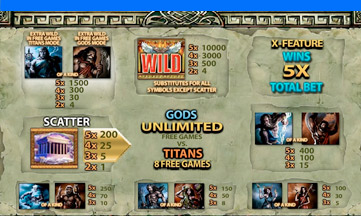 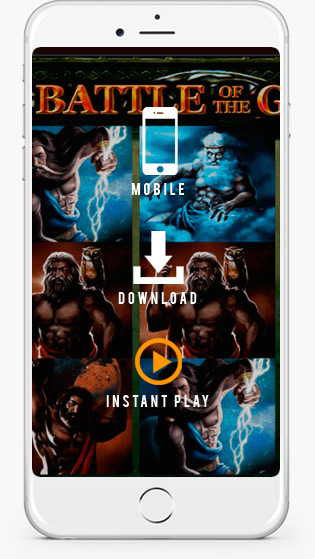