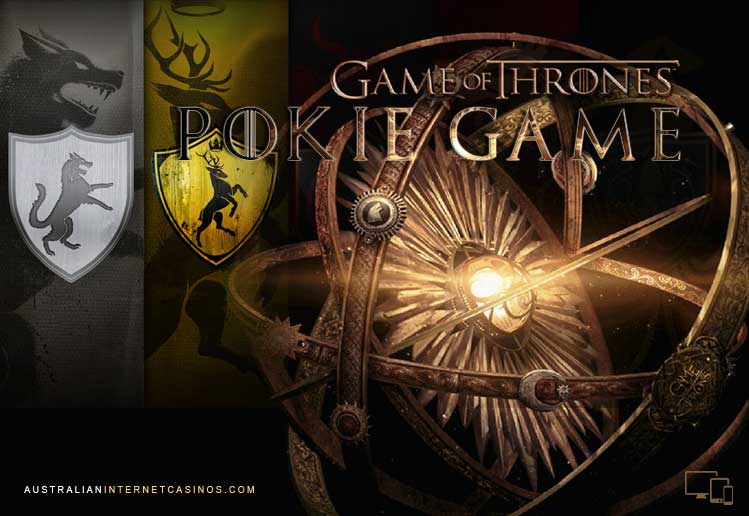 ABOUT GAME OF THRONES POKIE GAME

Game of Thrones pokie is powered by the legendary software gaming company Microgaming and pays 243 ways.

This pokie is based on the best-selling book series by George R.R. Martin, which became a television series and a worldwide hit. The show has won numerous awards and nominations which made
Game of Thrones one of HBO’s most popular series of all time.
Game of Thrones is a dramatic pokie with unique features, amazing animations and rich colors. The game revolves around epic battles for the land of 4 great Houses of Westeros: Baratheon, Lannister, Stark and Targarten. All are doing battle for the Iron Throne, players can either join their favourite side and get rewarded for trying to defeat the others – or try and beat everyone and get the Iron Throne themselves! Gameplay is accompanied by thrilling video footage of the TV series as well as the original, epic soundtrack. Game of Thrones is available in Viper, Flash and Mobile making it accessible to all players.

About Game of Thrones Bonus Games

Game of Thrones main attraction is the Free Spins feature where you players are given the opportunity to serve one of the 4 Great Houses of Westeros. Each House has their own unique number of Free Spins, Multiplier and Stacked Wild symbols. When the Free Spins feature appears players can choose from the 4 Free Spin offerings that represent the four Houses. The Free Spins can also be re-triggered.

The Scatter symbol is the iconic and imposing ‘Iron Throne’.
The Scatters award prizes, no matter where they appear on the screen. They also activate the Free Spins Bonus rounds. 2 Iron Throne Scatters landing anywhere on the reels will display a fiery Dragon’s Egg revealing a random consolation cash prize! 3 Scatters give the opportunity to serve one of the 4 Great Houses of Westeros by selecting one of the 4 Free Spin features:

Stacked Wild Symbols are depicted by the Wild Game of Thrones Logo symbols. The Wild symbols substitute for all other symbols to help create winning combinations. They can also be stacked on the reels – meaning that they can cover all spaces on a reel where big wins could be hiding!

Gamble Feature offers great rewards and takes players on an adventure into rough territory with menacing creatures in search of more wealth. Flip an ancient Braavosi coin to decide your fate, whenever the coin lands in your favor you will advance along a Trail featuring creatures that prowl Westeros and Essos. Cross the worlds of the Three-Eyed Raven, White Walker, Direwolf and Dragon by correctly choosing heads or tails at each stop along the way – each correct guess will Double your wins!

Where To Play Game of Thrones Pokie Game.

You can play Game of Thrones pokie game at one of our recommended Microgaming Internet casinos below. 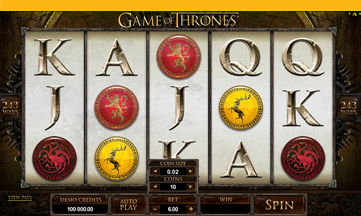 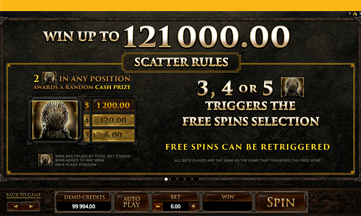 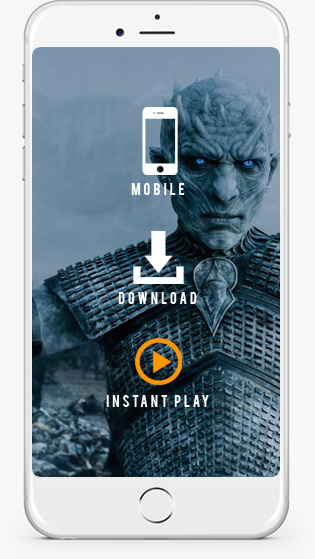