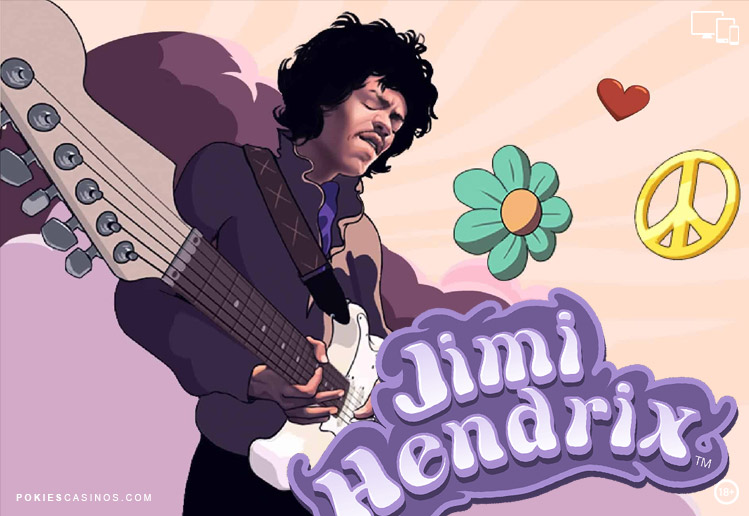 Jimi Hendrix pokie is powered by the well known software gaming company NetEnt and has 20 paylines and 5 reels.

Jimi Hendrix is one of the greatest rock legends who changed the way guitar was played forever. He was also a singer and songwriter, having a successful music career over 4 short years, before he died tragically at the young age of 27. He is widely believed to be among the best guitarists to have ever lived.

There are 6 Bonus features, the main one being the Pick and Click which rewards players with cash prizes, free spins and multipliers.

Cash bets can be controlled by adjusting the coin values and bet levels. There are 7 coin values ranging from 0.01 up to 2.00

About the Wild Symbol:

The Wild symbol is Jimi Hendrix with a purple background – when this symbol appears it substitutes for other symbols except the Scatter to create winning pay-lines.

Wild Transformations happen when the Wild symbol appears on the reels. It stretches along the reel to create more winning lines.

About the Scatter Symbol:

The Scatter is Jimi Hendrix dressed in white playing a white guitar.
The Scatter symbol only appears on Reels 2, 3 and 4.

The Bonus features offer a total of 6 Bonus games with Jimi Hendrix playing the guitar at regular intervals.
There are 6 Bonus features include Re-spins, Wild transformations and Multipliers. The main feature is the Pick and Click offering Cash prizes and 3 Free Spins.

About the 6 Bonus Games

Red Guitar Re-spins is triggered by 4 or more Red Guitar symbols anywhere on the reels. If a new Red Guitar lands on the reels during the re-spins another re-spin will be awarded.

This feature triggers when 3 Scatter symbols appear simultaneously on Reels 3, 4 and 5. Pick from loudspeakers, 3 matching loudspeakers activate the Bonus features:

The Purple Haze Free Spins:
Get between 6 and 12 Free Spins and, as in the base game the 10, J, Q, K and A become Wild for the free spins feature.

Get between 6 and 12 Free Spins with a minimum of 3 and maximum of 5 overlay Wilds appearing at random on the reels for each spin.

Jimi Hendrix features 9 Autoplay options giving up to 1 000 auto spins. Advanced autoplay allows for more specific settings such as: stopping on any win, stop if a single win is more than a set amount and stop if cash balance increases or decreases by a set amount.

Speed things up a bit with the Quick spin option:
Quick Spin makes the reels spin faster to speed up gameplay.

You can play Jimi Hendrix pokie game at any one of our recommended NetEnt Internet casinos below. 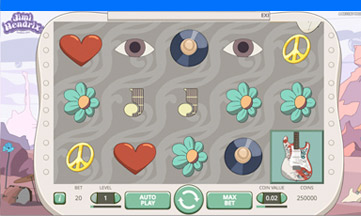 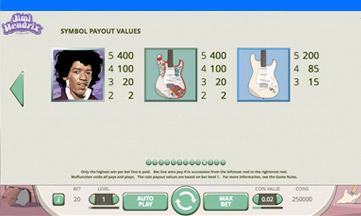 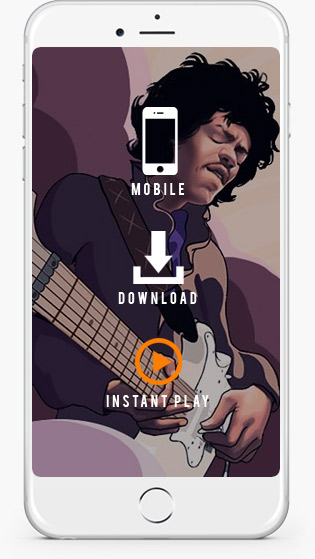