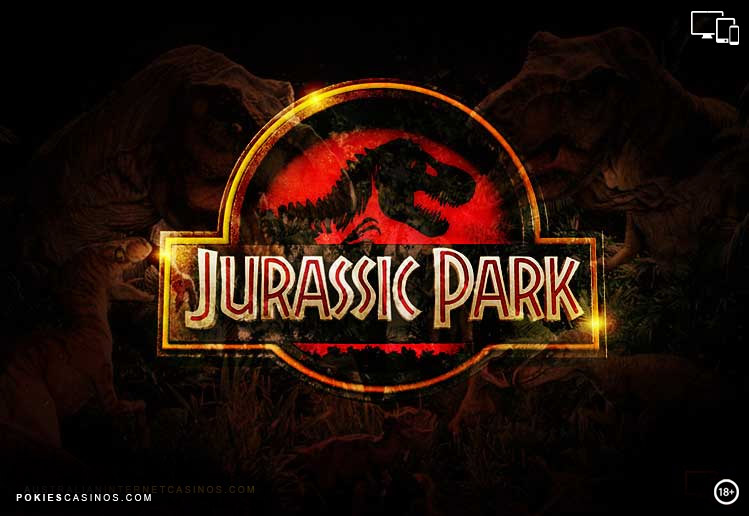 Jurassic Park pokie is powered by the innovative software gaming company Microgaming, has 5 reels and 243 ways to win

Players don’t need to worry about individual paylines; instead, every possible combination of symbols from left to right can count as a win, giving the equivalent of 243 lines to play.

Based on the iconic film directed by Steven Spielberg back in 1993, it became one of the most popular films of all time.
A group of genetic scientists created a wildlife park full of cloned dinosaurs. The dinosaurs escape and end up terrorizing the tourists! This pokie game was one of the first to use Parallax Scrolling effects.

The detailed graphics are brought to life as the reels spin in front of a slowly scrolling jungle background with the original movie music playing as accompaniment. There are nine basic symbols including the characters Dr. Allan Grant, Dr. Ellie Sattler, Dr. Ian Malcolm and John Hammond. The dinosaurs include Brachiosaurus, Dilophosaurus Triceratops, Tyrannosaurus Rex and Velociraptor.

Jurassic Park has a variety of bonuses, some which get triggered randomly and can increase the amount of Wild symbols.

T-Rex Alert is a randomly triggered feature which automatically adds 35 Wild symbols to the reels, greatly increasing winning chances on each spin. Hit 3 or more scatter symbols anywhere on the reels to instantly trigger a Free Spins game. There are different features that can be unlocked, each of which is a different dinosaur.

The Jurassic Park Logo acts as the Wild symbol replacing all symbols except the scatter symbol. The Wild can also earn its own prizes by matching 3 or more in a row. As an added bonus, these Wilds are stacked on the reels, which could cover an entire reel with Wilds at the same time.

In the base game the T-Rex Alert feature which is activated at random. It plays for 6 spins with T-Rex appearing behind the reels on the 3rd spin. Get up to 35 Wilds added to the reels during the 6 spins, the bonus Wilds stay on the reels throughout the feature.

The Tyrannosaurus Rex will be the first game giving access to the other Free Spins games when the free spins feature has been triggered more than 25 times. Then players get to choose their game, getting 12 free spins for any one chosen.

About the Free Spins Features:

The T-Rex symbol can appear at any time to turn a random number of reels completely Wild – sometimes up to all 5 reels simultaneously. Each of these games also has stacked versions of the T-Rex giving a better chance of matching them on multiple lines.

This feature has Split Wilds or Wild Multipliers.
Split Wilds split into 2 separate symbols creating more winning combinations such as a 6 of a kind. Multiplier Wilds award a random multiplier of 4x, 5x or 6x on winning free spins. The Velociraptor symbol can also stack 3 symbols deep on all reels!

Featuring a Mystery Multiplier feature.
A multiplier of 2x, 3x, 4x, 5x or 6x will apply to a random amount of free spins. The 6x multiplier can be active for 4 free spins!
This feature can re-trigger more free spins.

Find running wilds, random stack nudges and re-spins.
Running wilds sees wild stacks increase after each spin with up to 14 wilds on a reel. Re-spins can also be triggered on non-winning spins where the wild stacks will nudge and/or hold while the remaining reels spin again.

The Dilophosaurus will spit at a symbol turning it wild!
A winning combination with a winning wild will remain throughout the whole feature. 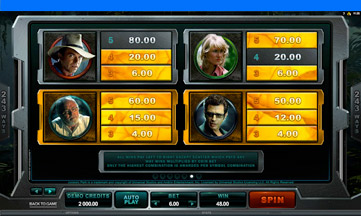 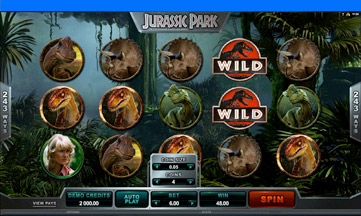 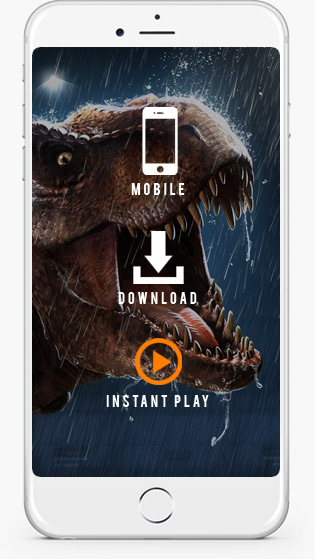