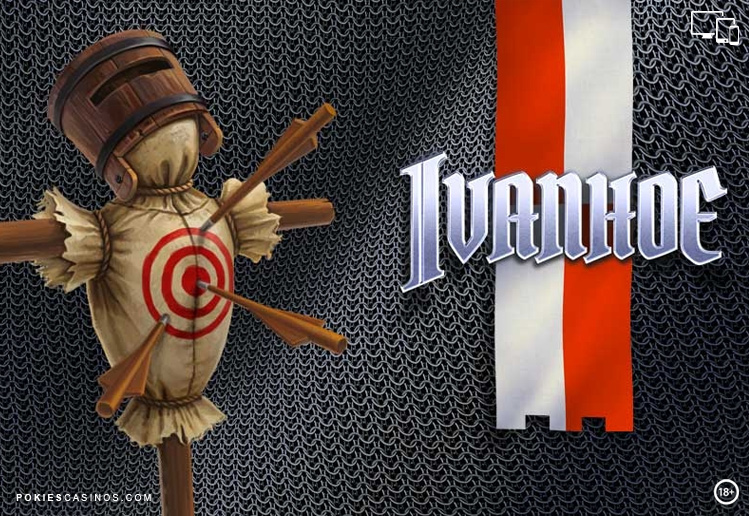 Ivanhoe is powered by the leading Elk Studios gaming company and has 17 paylines with 3 reels. Ivanhoe is based on the popular novel written by Walter Scott, which was published in 1820. The romantic novel was set in medieval England during the 12th century. The hero was a member of the nobility, a Saxon knows as Wilfred of Ivanhoe. Ivanhoe fights alongside Richard the Lionheart in order to get the King back on the throne.

To this day the novel has remained quite popular, various sequels have been written and there have been various adaptations for Theatre, Films and Television. The pokie has a medieval design with a retro style and a quick visit into the future featuring a modern dot matrix! Classic symbols include Crowns, Cherries, Lemons, Watermelons, Bars and Red 7’s, Blue 7’s.

The bonus game offers different challenges on a rough journey towards increasing multipliers and towards the ultimate goal to get the King back on the throne. The Ivanhoe Bonus Game feature will play out Free Spins on 5 different levels –win certain amounts to move up a level which increases the multiplier and awards more free spins.

This is a highly volatile pokie with wins of up to 3 000 times the bet. Players can implement different tactical approaches to the game set-up with the free spins and special bonus game levels plus a range of betting strategies.

Ivanhoe has built-in Betting Strategies that help players take advantage of winning or losing streaks. This allows players the option to select automatic bet level modifiers such as:

Booster: Raises the bet level by 1 after a loss, and resets with a win.

Leveller: Raises the bet level by 2 after 5 consecutive losses, and resets with a win.

Jumper: Raises the bet 1 level after a winning spin but plateaus after 4 consecutive wins.

Optimiser: Bet level changes based on the percentage of players balance.

This game has an average Return to Player percentage of 96.3%

The Ivanhoe Bonus Game feature gets activated by landing the Ivanhoe Bonus symbol on all 3 reels. The Bonus Game consists of 5 different Levels with increasing Multipliers. Each Level gives the opportunity to win a set number of coins by facing different challenges to recapture the Crown for Richard the Lionheart. Trigger the free spins by landing 3 Scatter symbols simultaneously.

About the Ivanhoe 5 Bonus Levels with increasing Multipliers

The Free Spins feature is triggered by landing 3 scatter symbols at the same time. This feature has 5 different Levels – for each Level players get a number of free spins and multiplier. To raise one level to the next, a specific number of coins must be won during the given free spins.

There are 5 different Bonus Levels with increasing Multipliers:

The 5 Bonus games are part of the same overall Free Spins Bonus:

Level 1 – Ambush: All wins are doubled and receive 5 Free Spins where 2 500 coins must be reached to climb up to Level 2.
For every extra Bonus symbol that appears an extra Free Spin will be awarded.

Level 2 -The Joust Part 1: Get 3 extra Free Spins where 8 000 coins must be reached to climb up to Level 3. All wins come with 3x Multiplier.

Level 3 – Robin’s Rescue: Get 3 extra Free Spins where over 20 000 coins must be reached to climb up to Level 4. All wins come with a 4x Multiplier.

The Crown acts as the Wild which replaces all other symbols except the Ivanhoe scatter.

Select the Autoplay option to spin the reels without interruption for a chosen number of times.
Set the reels to spin 10x, 25x, 50x or 100x or set another amount.

Where To Play Ivanhoe Pokie

You can play Ivanhoe pokie at one of our recommended Elk Studios Internet casinos below. 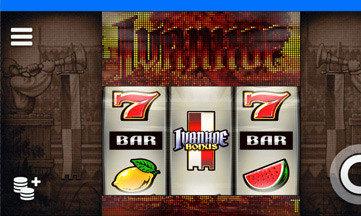 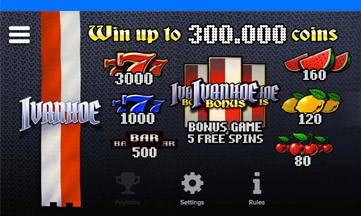 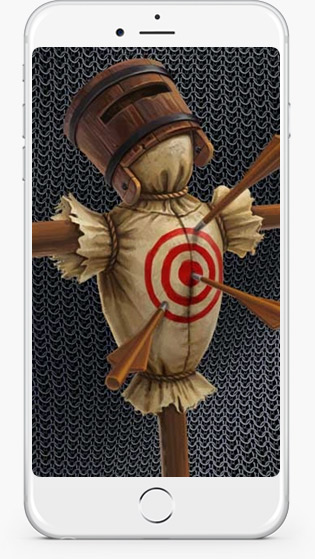