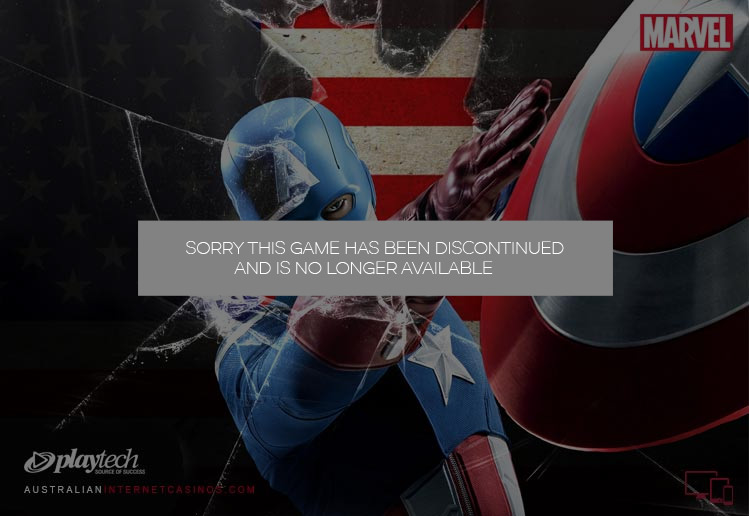 Captain America pokie is powered by the innovative software company Playtech and has 20 paylines with 5 reels. One of Marvel’s most celebrated comics, the Captain America pokie depicts the story of Steve Rogers who leaves the US Army and is given a powerful serum which turns him into a super human soldier. Set in World War 2, Captain America battles against his arch enemy the Red Skull who is also Adolf Hitler’s head of weaponry.

Captain America embarks on a quest to save America from the evil forces which earned him the name of the first Avenger. This pokie offers action packed entertainment, free games and the life changing Marvel Jackpot.

The Super Energy Free Games Feature is triggered by landing Captain America on Reel 1, Free Games symbol on Reel 3 and Red Skull Wild on Reel 5 at the same time. This will award 4 Free Spins with additional free spins and multipliers.

Captain America and Red Skull act as Wilds – they can substitute for any other symbols, or as a 2x multiplier if it is substituting for the symbols related to that character. The Wilds can also win on their own when landing 2 or more in a row. Match 5 Wilds on the same line to get up to 5 000 credits.

Captain America’s Shield appears as the Scatter – land 2 or more at the same time to win prizes. Hit 5 scatters and get up to 100x the total cost of the spin.

The Super Energy Free Games Bonus feature is triggered by landing a Captain America symbol on the 1st reel, a Free Spins symbol on the 3rd reel, and a Red Skull symbol on the 5th reel.
Win 4 free spins and a second screen will open revealing additional bonuses. Pick from 9 squares with hidden symbols to unlock the features:

4 Free Spins: There are 3 of these on the grid, when landing one it awards 4 additional free spins.

+1 Multiplier: All wins will be multiplied during the free spins, from 2x up to 3x.

Free Games Re-trigger: A symbol on reel 3 will appear that can trigger 4 more free spins during the bonus round.

Captain America/Red Skull: Select either one of the symbols for them to become Expanding Wilds during the free games.

The Marvel Progressive Jackpot can be randomly triggered on any spin, but the chance of hitting it is based on the amount spent on each spin. 20 squares will appear on the screen, select the squares to reveal a symbol that belongs to one of the 4 ‘Power’ Jackpots of different sizes. Reveal 3 identical symbols to win that jackpot.
Unlocking the Ultimate Power Jackpot, can potentially award millions!

You can play Captain America pokie game at anyone of our recommended Internet casinos below. 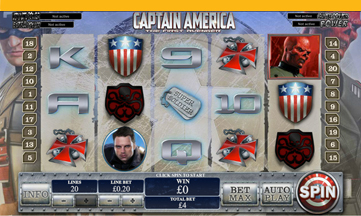 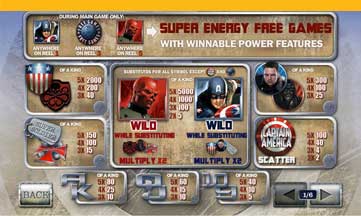 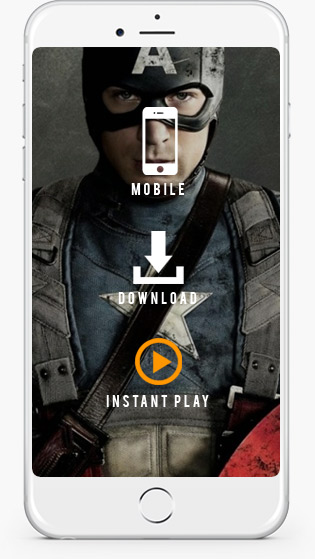