Mighty Midas Jackpot Games In Age Of The Gods Pokies 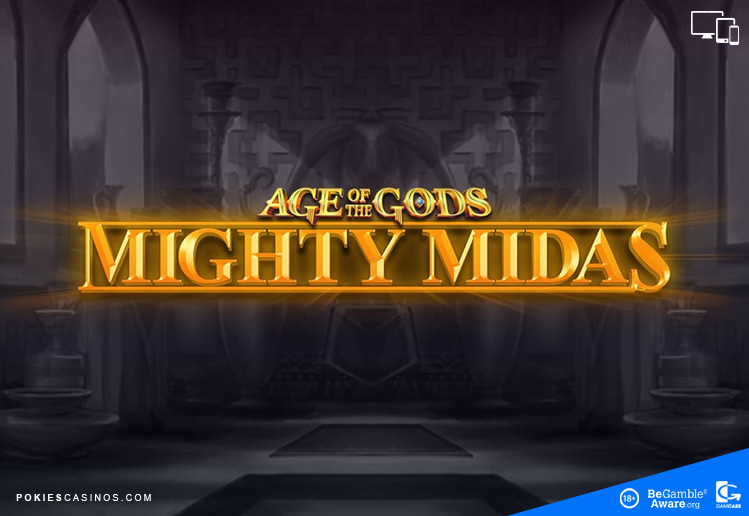 Age of the Gods - Mighty Midas

Age of the Gods – Mighty Midas is powered by the renowned software gaming company Playtech and has 50 paylines with 5 Reels.

Mighty Midas is part of the Age of the Gods series from Playtech and is inspired by Ancient Greek legends.

Based on King Midas, who had the ability to turn everything he touched into gold, known as the Midas Touch. This Midas Touch was more of a curse than a blessing; King Midas was not able to eat anymore which ultimately caused his death.

Mighty Midas is a visually stunning pokie set within an opulent room in the palace. This pokie offers simple gameplay with appropriate background music and incredible HD graphics.

They symbols include King Midas, Princess Marigold and his sons Lityerses. Selenius, King Midas mentor and the God Dionysus also appear on the reels. The images depict a feast including apples, bunches of grapes, goblets of wine, roses and a delicious roast chicken.

Mighty Midas has bonus features where King Midas transforms symbols into Golden Wilds which can award multipliers and big payouts. There are also four progressive jackpots which can appear at random.

The pay-table offers a variety of themed symbols with no classic playing cards. The lower-paying symbols such as Grapes, Roses, Apples and various foods can award from 5 to 125 coins for 3 to 5 of a kind.

King Midas has the highest payout rating with a maximum of 500 coins for 5 matching symbols. The average Return to Player percentage is 96.34%

The rainbow colour Pentagram Scatter is the important symbol in this game. The Scatter will only appear on the 1st and 5th reels. A Wheel will turn to reveal a colour corresponding to a different type of bonus feature.

The Gem Bonus features will be unlocked when 2 Scatters appear simultaneously on reels 1 and 5. Win free spins with wilds added in the reels, or with a symbol that transforms into a Wild with instant prizes and premium multipliers.

About the Age of the Gods – Mighty Midas Wild Symbol

The Wild symbol is a Golden Brick with the word “Wild” inscribed on it. The Wild substitutes all the symbols except the Pentagram Scatter Symbol.

About the Age of the Gods – Mighty Midas Bonus Games

About The Midas Touch

5 free spins will be awarded and any of the high paying symbols will be randomly chosen to become a Golden Wild which can go up to a 3x multiplier.

Awards 7 free spins which all come with multipliers. If a Midas Touch symbol points to a multiplier Wild symbol, the 2 multipliers will be added up which can award up to 30x multipliers.

Get 3 free spins where all the Midas touch symbols are double stacked with wild multipliers up to 3x.

5 free spins are awarded where Golden Wild symbol stacks get added to the 2nd, 3rd and 5th reels.

Added Golden Wilds will remain on the reels for all the 5 free spins.

4 Progressive Jackpots can be won at random when entering the Jackpot Game. Pick from 20 coins to match 3 of the same kind to win the corresponding progressive jackpot: Power, Extra Power, Super Power and Ultimate Power.

Use this option to spin the reels automatically from 10, 25, 50 or 99 spins. The option, ‘until bonus features’ has been added which stops Autoplay when a bonus gets triggered.

Where to play Age of the Gods – Mighty Midas Pokie Game.

You can play Age of the Gods – Mighty Midas pokie game at our recommended Playtech Internet casinos below. 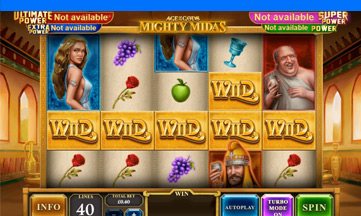 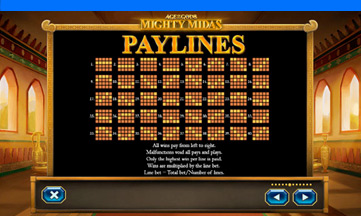 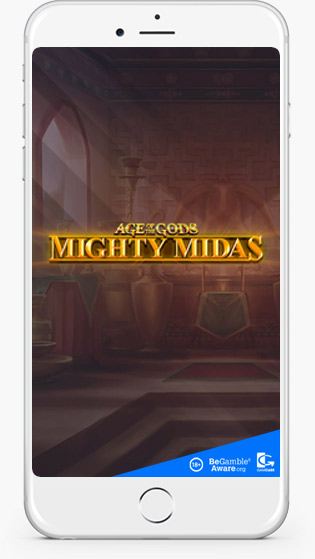