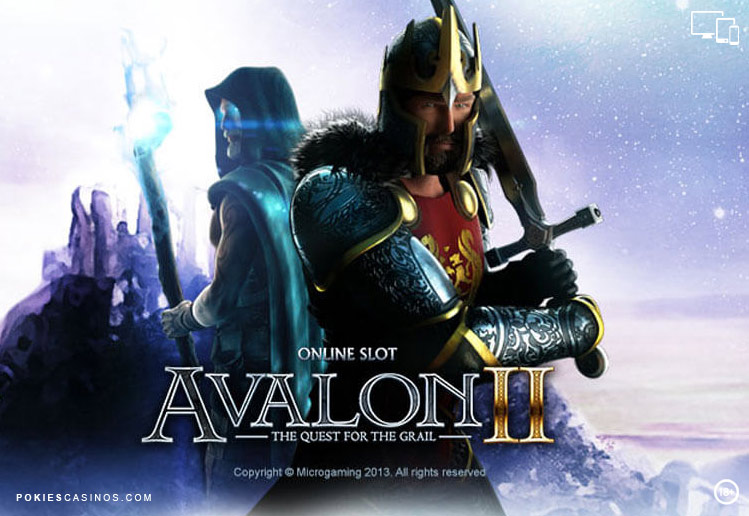 Avalon II pokie is powered by the legendary software gaming company Microgaming and has 5 reels and 243 ways to win.

Avalon II – The Quest for the Grail is the sequel to the popular Avalon pokie. Based on the legendary tale of good versus evil, players help King Arthur retrieve the Holy Grail and restore it back to Avalon. This game is fast moving with detailed images and an impressive soundtrack. The cinema-quality 3D animation takes players into a mind blowing world of mystical adventures!

The highest payout is 120.000 when playing the highest stake and the average Return to Player is 97%

Apart from the base game there are 8 exciting Bonus Games!
Select a route through the game’s trail bonus which involves playing 7 different games as individual steps.

The base game has 2 randomly triggered features: Merlin appears randomly awarding a random cash prize or multiplier. There is also the Expanding Wild feature which appears on the middle reel.

The quest takes place over 8 Bonus games as players must choose between two bonus games at the 3rd stage. The stages are triggered by 3, 4 or 5 Grail Scatters appearing anywhere on the reels. Return to the base game whenever a stage is completed so that the triggers can open the next stage. These bonuses offer multipliers, 2nd screen bonus games and free spins.

The Scatter is the Holy Grail which is the most important symbol of this game. Land 3 or more Holy Grail scatters anywhere on the reels to trigger the main Bonus feature with 8 different mini features.

When the first Bonus round begins, players must complete the first stage. After each stage players will return to the base game. Evert time another 3 scatters appear, players advance to the next stage of the game.

The Lady of the Lake is the Expanding Wild symbol which will only appear on the 3rd reel turning the entire reel Wild giving many more chances to hit winning combinations. The Wild also substitutes for all other symbols except the Scatter. The Forest Falls bonus game also features a Trailing Wild, which expands down the screen and holds in place for one spin.

This main feature will be activated when 3 or more Holy Grail scatter symbols appear anywhere on the reels. Progress through a number of different games to reach the final destination. Every time the feature is triggered the next game will open as explained below:

Dice Roll – Get 10 dice rolls – try and complete Excalibur by re-forging the sword fragments. The Dice reveals a number associated with a sword fragment number. If they match, the sword fragment with the matching dice number moves into the reforge display. The number awarded is equal to the multiplier paid out (i.e. number 6 gives 6x the stake).

Choose a Wild – receive 15 free spins with a 1x multiplier.
Select 1 of the high end symbols to act as extra wild for the duration of the feature – the extra wild has a 2x wild multiplier. After playing the first 2 features, there will be a choice between the
3rd and 4th bonus features.

Pick 1 of 5 Shields – pick 1 shield hoping to get the highest multiplier. The multipliers begin from 10x the stake going up to 160x times the stake!

Receive 20 free spins with a 1x multiplier.
Watch out for the Avalon II wild as this is the Trailing Wild.
When one of these Wilds lands on row 1 or 2, 20 free spins will be awarded. These Trailing Wilds move from the top to bottom of the reels, leaving a trail behind them. The reel will stay in place expanding downwards – and it will hold for 1 spin.

12 items will appear on the screen. Match 2 Helmets of the same type – each helmet has a multiplier ranging from 6x to 20x. The more incorrect choices made, the higher the multiplier applied to the final prize

Receive 20 free spins with a 2x multiplier with Rolling Reels.
This means symbols in winning combinations will disappear to be replaced by more symbols, potentially making more winning lines.

Battle the Black Knight to win a cash prize for each successful attack or block. Select the best moves by either blocking or attacking the Black Knight and hopefully retrieve the Holy Grail.

Spin a succession of Wheels to win the highest bonus multiplier. There are 4 wheels in total but the 4th wheel can only be unlocked by getting a zero on the 3rd wheel. The numbers won on each wheel create the multiplier award.

The Gamble Feature is optional and it can be boost winnings! Players can take a high stake where wins could be doubled or quadrupled when correctly guessing the Color or the right Suit of a down-turned card. If the guess is incorrect all winnings for that bet will be lost. 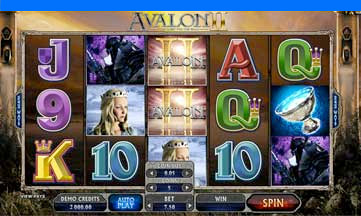 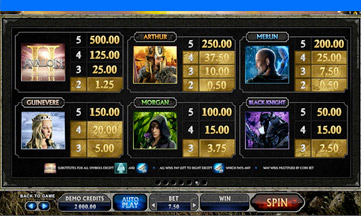 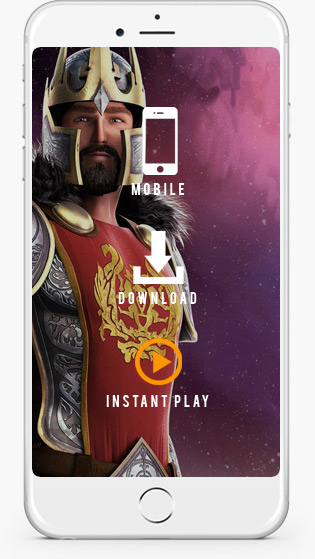