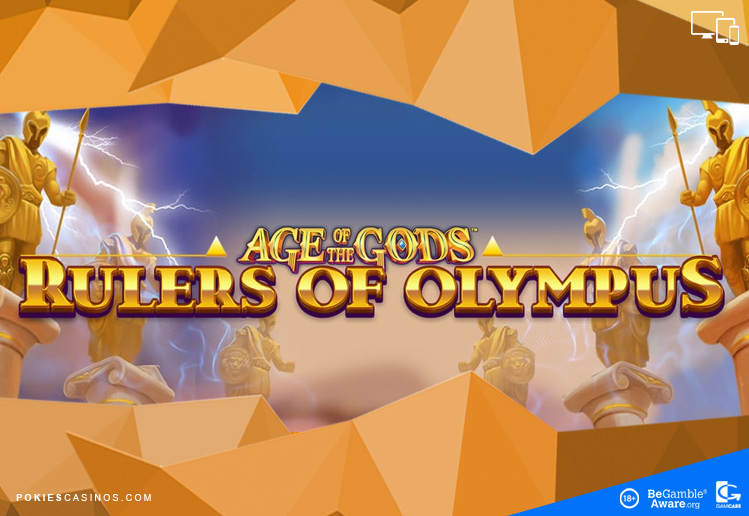 Age of the Gods – Rulers of Olympus Playtech Pokie

Age of the Gods – Rulers of Olympus

Age of the Gods – Rulers of Olympus Playtech Pokie Ratings

Age of the Gods – Rulers of Olympus is powered by the well known software gaming company Playtech and has 25 paylines with 5 Reels.

Rulers of Olympus forms part of the Age of the Gods series from Playtech which is inspired by Ancient Greek legends. Featuring impressive, comic style symbols including the Gods and Goddesses Aphrodite, Athena, Hades, Hera, Poseidon and Zeus. This pokie comes with shifting Wilds and the Battle for Power Free Games where Hera and Zeus clash to award extra wilds.

The average Return to Player percentage is 94.00%

About the Age of the Gods – Rulers of Olympus Wild Symbol

The wild symbol substitutes for other symbols except the bonus symbols and offers up to 40x the bet per payline.

Shifting Wilds – Hera vs Zeus – they can appear on any base game spin with Zeus shifting t the right on each spin and Hera shifting to the left on each spin until they drop off the reels.

About the Age of the Gods – Rulers of Olympus Bonus Games

About the Olympus Free Games

Land the Olympus Free Games scatter on Reel 5 to receive 7 free spins. This feature uses only the higher paying god/goddess symbols which are played on a new 50 payline reel set. Up to 10 Zeus symbols will be locked on the reels for every free spin during this round.
The free spins can be re-triggered indefinitely which means unlimited free spins.

About The Thunderbolt Bonus feature

The Thunderbolt Bonus activates when the Bonus scatter symbol lands on Reel 5. The mighty Zeus will fling thunderbolts onto the reels which will turn up to 7 symbol positions Wild. A new payout will follow with the wilds in position.

Rulers of Olympus are part of the Age of the Gods Jackpot Network. The 4 progressive jackpots rounds can appear at random on any spin. Pick from 20 coins to match 3 identical coins to win the corresponding progressive jackpot: Power, Extra Power, Super Power and Ultimate Power.

Use this option to spin the reels automatically with an option that stops Autoplay when a bonus gets triggered.

Where to play Age of the Gods – Rulers of Olympus Pokie Game.

You can play Age of the Gods – Rulers of Olympus pokie game at our recommended Playtech Internet casinos below.

Age of the Gods - Rulers of Olympus 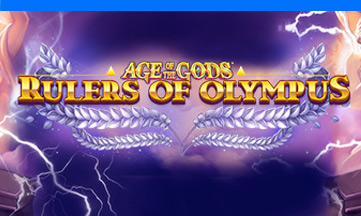 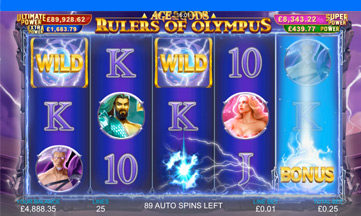 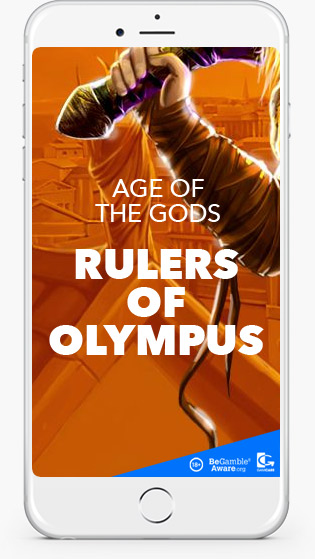