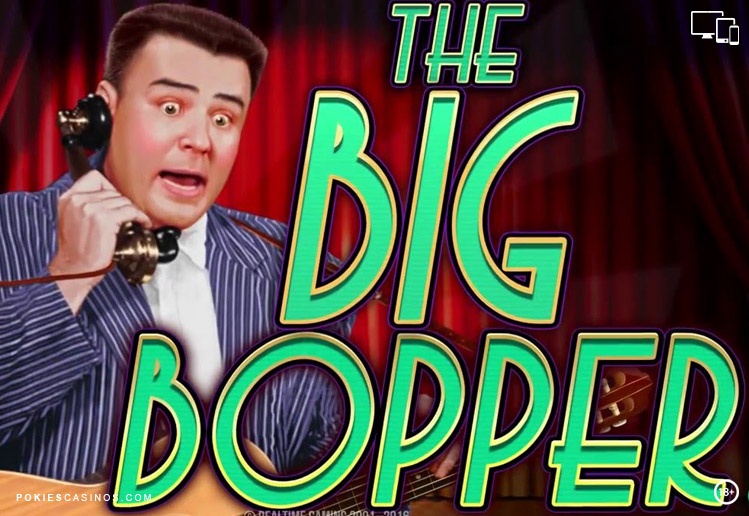 ABOUT THE BIG BOPPER

The Big Bopper pokie is powered by the well known software gaming company RTG and pays 729 different ways with 6 reels. This pokie offers insight into the life of the legendary Jiles Perry “J. P.” Richardson, Jr. In the year 1959 at the age of 29, he died in a plane crash along with music stars Buddy Holly and Ritchie Valens. The event became known as The Day the Music Died…

In this 1950’s Rock ‘n Roll themed video pokie The Big Bopper plays some of his greatest hits such as ‘Chantilly Lace’ and ‘The White Lightening’. This pokie is played with 6 reels and an amazing 729 ways to win together with some rewarding features such as Free Spins, Multipliers and All Ways Pay. Rock ‘n Roll lovers will enjoy the cool symbols such as the Transistor Radio, Wurlitzer Jukebox and the printed 12” Vinyl records with a killer soundtrack

The betting option can be adjusted at any point during play – locate the ‘Bet’ option beneath the reel set, use the up and down arrows on either side to change the amount displayed.

About the 3 Big Bopper Bonus Games

The Big Bopper features 3 Bonus features.
The Instant Win feature is triggered when Bopper Scatters show up on the reels and players can win up to 250x their total bet.

In the Chantilly Lace Free Spins players can win up to 45 free games with up to 10x multipliers! Get the White Lightning Free Games round to Spin the reels for Free for the duration of the popular song ‘White Lightening’.

The Wild symbol is the Big Bopper who appears only on Reels 2, 3 and 5. The Wild substitutes for all symbols besides the Scatter symbol. This is a 100% Stacked symbol that covers an entire reel at once. Any wins containing the Wild symbol will be tripled.

Bopper is the Scatter symbol, when 3 or more appear on adjacent reels from Left to Right and Right to Left, it will create a winning combination. The Scatter wins get added to All Ways Pays wins and multiplied by the total bet.

Get 6 Scatter symbols in the form of BOPPER letters in the correct order to a bonus. If a 1, 2 or 3 letters are missing the re-spin feature will activate spinning the other reels for a second chance.

The Re-Spin feature is triggered when 3, 4 or 5 Scattered Bopper symbols appear from Left to Right and Right to Left on the reels.
The reels will freeze while the other reels re-spin once. If a Bopper Scatter appears again during the re-spin, an Extra re-spin will be awarded.

When the Instant Win feature is activated, The Big Bopper will sing and you win! When he sings Chantilly Lace he will instantly reveal a Jackpot of up to 20x the bet. Should he continue singing extra wins could be revealed of up to 50x, 100x and 250x. When the Chantilly Lace Free Spins are triggered more free games will be won as long as the Big Bopper sings. He will award up to 45 free games with up to a 10x multiplier.

Big Bopper also features the ‘Autoplay’ button. Choose to switch from manual to automatic spin. The reels spin for a pre-selected amount of times and stop by clicking on ‘Auto Stop’ to switch back to manual spin.

Speed Selection  The speed at which the reels turn can also be changed by selecting the soda bottles at the bottom, left corner of the screen. The fastest speed happens when all the bottles are visibly filled with soda.

Where To Play The Big Bopper Pokie Game.

You can play The Big Bopper pokie game at any one of our recommended RTG Internet casinos below. 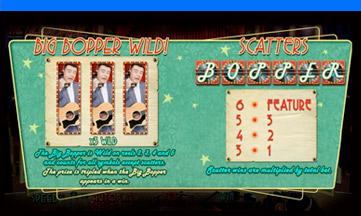 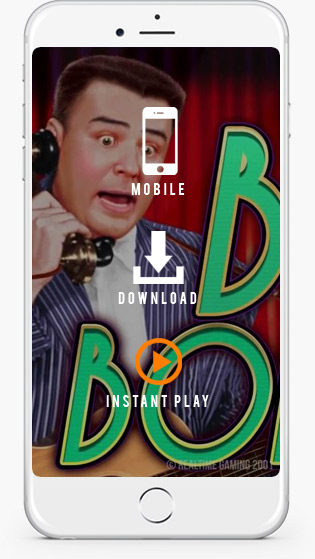