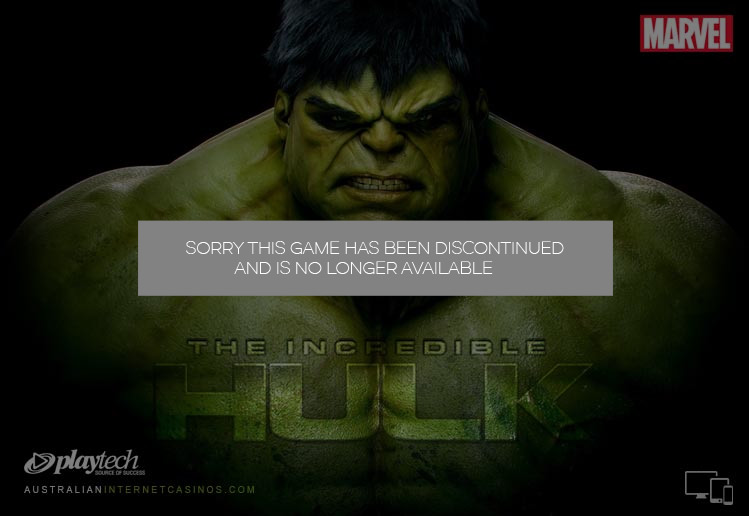 Incredible Hulk pokie is powered by the well known software company Playtech and has 50 paylines with 5 reels.

The Incredible Hulk pokie is based on the comic book hero and blockbuster movie with film stars Liv Tyler and Edward Norton.
The story is about Bruce Banner, a scientist who turns into the green, giant Incredible Hulk when he gets angry. This pokie has cartoon style images which is a bit different from other Marvel pokies that try to incorporate real life movie images as their symbols. The Incredible Hulk features an Expanding Hulk where he can expand 3 reels.

During the Smash Bonus feature he smashes police cars and helicopters to win cash prizes with a multiplier. The Free Spins Bonus feature triples all wins and there is a Progressive Jackpots on offer!

The Smash Bonus symbol will trigger this game when it appears on reels 1 and 5.
A screen will open displaying cars, help The Hulk to destroy 3 of the cars to win prizes.
The Hulk must also crash a helicopter to win a multiplier with those prizes.
The Expanding Hulk can cover an entire reel awarding re-spins.

About the Wild Expanding Hulk Symbol

The Hulk Wild symbol appears in the middle of the 3rd Reel it becomes an Expanding Hulk and fills the entire 3rd reel. In addition, another 2 re-spins will be given with all the other reels spinning. Should The Hulk symbol appear anywhere on reels 2, 3 and 4 the Wilds expand on all 3 reels awarding 1 re-spin with reels 1 and 5 spinning. This is known as Expanding Hulk.

The Scatter is the Incredible Hulk Logo – land 3 or more anywhere to trigger the Free Games feature.
Receive 10 Free Spins with a 3x multiplier.
The Expanding Hulk can also be triggered in this feature and wins are subject to the 3x multiplier.
More free spins can be re-triggered.

About the Smash Bonus Feature:

The Smash Bonus feature will be activated by the Smash Bonus symbol appearing on reels 1 and 5. 7 Police Cars will appear on the screen, smash 3 cars to reveal cash prizes. Also 3 Helicopters will appear– smash 1 Helicopter to reveal the multiplier up to 5x. There is also the randomly triggered Hulk Rage feature where Hulk will smash all 7 police cars for some whopping wins.

The Incredible Hulk is part of the multi-level Marvel Power Jackpots network. There are 4 Progressive Jackpots that can be triggered on any Marvel super-hero themed game. The trigger for Jackpot game is random and can begin after any spin in the linked games.

A new screen will open with 20 different squares. Uncover each square to reveal a symbol. There are 4 different jackpot symbols – find 3 matching symbols to win the jackpot!

Autoplay Feature  Choose to play this pokie without any interruption by clicking on Auto Play. Autoplay allows the reels to spin automatically up to10, 25, 50 or 99 times or until wining in the Bonus Round.

Where To Play The Incredible Hulk Pokie Game.

You can play The Incredible Hulk pokie game at anyone of our recommended Internet casinos below. 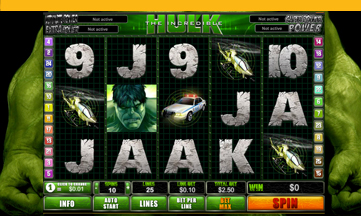 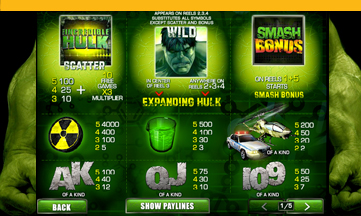 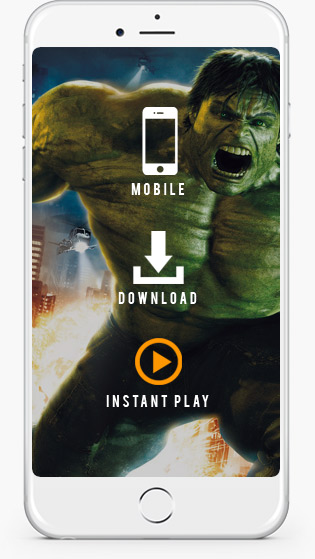