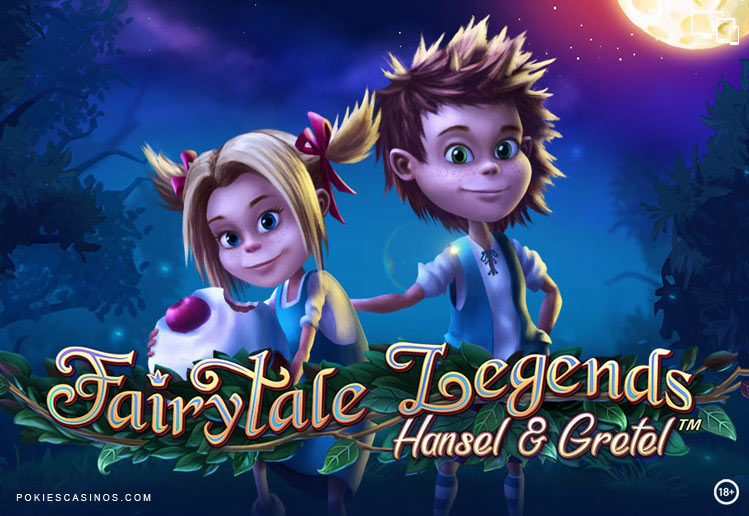 HANSEL AND GRETEL BY NETENT

Fairytale Legends – Hansel and Gretel is powered by the innovative NetEnt software developer.

Fairytale Legends – Hansel and Gretel plays at a default, 10 paylines with 5 reels. The classic fairytale from Brothers Grimm in 1918 is about a brother and sister, Hansel and Gretel who have been left alone in the forest. They come across a strange looking cabin made of confectionery and cake that isn’t quite what it seems.

The witch who lives in the cabin kidnaps the children. Follow these children in their journey and see how they get to outwit the witch.

The story is set in a magical forest with 3D graphics and visual effects.
Fairies flutter around the screen throwing sparkling magic dust on the reels.
Hansel and Gretel will cheer and jump when landing a winning combination.
The soundtrack completes this forest adventure and creates a truly mysterious and magical slot.

Players must play all 10 lines, but the wide range of coin values available make this pokie appealing to budget-conscious players and high rollers.

Stacked Wild symbols landing on the 2nd and 4th reels will award Re-Spins.

There are 3 Bonus games namely: Candy House – picking mini-game where candies multipliers are hidden behind a candy. Free Spins – get 10 free spins which can be re-triggered. Coin Win awards 15x the current total bet.

3 Random Features will be awarded by a Fairy:

About Scatter Bonus Round

About the Stacked Wild Re-Spins

The Wild is the Fairytale Legends logo which substitutes for all other symbols except the scatter. The Wild always lands stacked on the reels. The Wilds can only land on Reels 2 and 4, during the base game which can change when activating the game’s features. Whenever a stacked Wild symbol covers either reels 2 or 4 a re-spin will be awarded with the Wild staying locked in place.

During the re-spin, Wilds can also land on Reels 1 and 5. If another stacked Wild appears a re-spin will be awarded again. This will continue until no more stacked wilds land on the re-spin.

In this Pick ’Em game 15 candies will appear, each with its own hidden multiplier cash prize. Select 3 candies, choose to take the average of the hidden prizes or pick one and claim the multiplier prize that is revealed.

Get lucky with an instant Coin Win worth 15x the current total bet.

Fairy Wonder Spin, Fairy Surprise, or Fairy Wild Spin These 3 features can be randomly triggered during the base game.

A fairy will appear on the screen and giving one of the awards:

The Fairy will award up to 9 Wild Fairytale Legends logo symbols.

These Wilds will appear in the form of a cluster on reels 2, 3 & 4 with Reel 3 always being fully stacked during a spin.

The Fairy can magically appear after an unsuccessful spin.
She will wave her wand and choose a symbol at random.
Starting from the lowest value, symbols will then transform into the chosen symbol. This continues until the transformed symbols make a win!

The Fairy can activate this feature where2 Stacked Wild symbols appear on any of the reels. A Sticky Wild Re-Spin begins after the initial spin and continues until new stacked Wilds appear on the next spin.

Autoplay spins the reels automatically for a chosen number of times without interruption.

Where To Play Hansel And Gretel By NetEnt. 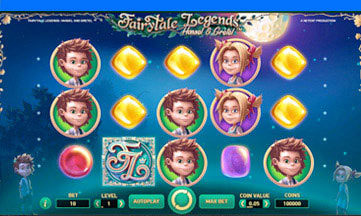 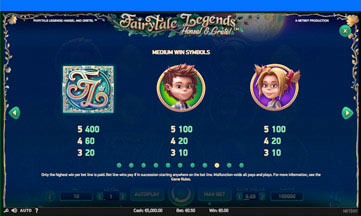 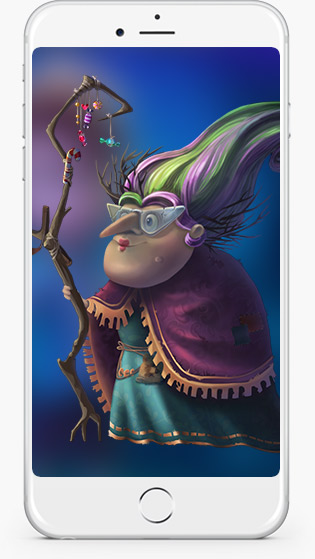