Age of the Gods Fate Sisters by Playtech 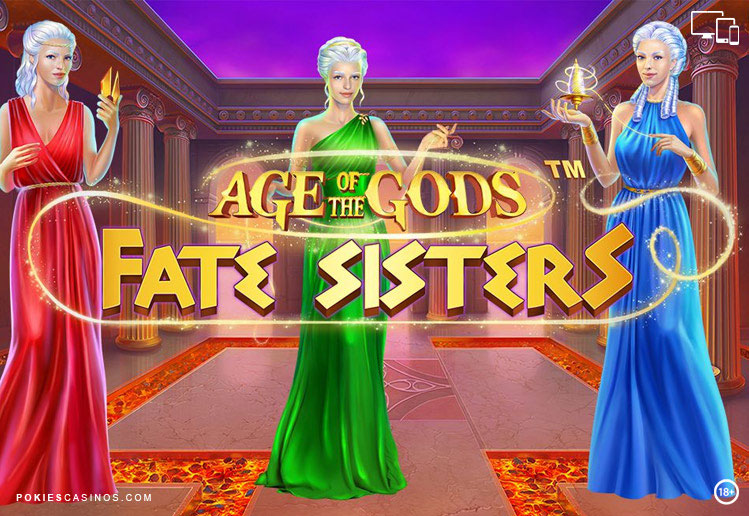 Age of the Gods Fate Sisters

Age of the Gods - Fate Sisters

Age of the Gods Fate Sisters by Playtech

ABOUT AGE OF THE GODS – FATE SISTERS POKIE GAME

Age of the Gods – Fate Sisters pokie is powered by the top software company Playtech and has 25 paylines and 5 reels. This pokie is based on 3 Sisters who determined the Fates of every Mortal, God and Titan, following the story of the Moirai or ‘fates’. The 3 sisters – Atropos, Clotho and Lachesis were responsible for directing the course of one’s life on the 3 rd night after birth.

The Greek’s maintained that there were 3 great threads:

The game features free spins, re-spins, and dynamic multipliers, sticky and random Wilds. Players will also get a chance to play the potentially massive Age of the Gods Progressive jackpot.

About Age of the Gods – Fate Sisters Bonus Games

The Bonus Features include the Sisters’ Gift feature, the main attraction is the Fates’ Portal Free Games.

Sisters’ Gift is played when Lachesis lands on Reel 1, Clotho on Reel 3 and Atropos on Reel 5 simultaneously. The sisters will remain in their positions for the Free Re-Spin.

The main feature is the Fates’ Portal Free Games which is activated by landing 3 Scatters anywhere on the reels. Select a Temple to enter, each is represented by one of the sisters – the Temples have different characteristics free spin amounts.

The Rare Golden Coin Wild symbol has an image of 3 ladies, it will substitute for all other symbols except the scatter symbol.

The Scatter is a Blue Vortex, 3 Scatters anywhere on the reels will activate the Portal Free Games feature.

About the Fates’ Portal Free Games:

3 Scatters trigger this feature – select which Temple to enter which is represented by each of the sisters – the Temples have different characteristics free spin amounts:

Clotho’s Temple – grants 8 spins with random wilds. 3 random wilds get added on each spin. If Clotho appears anywhere on Reel 3 an additional 3 free spins will be awarded.

There are 4 Progressive Jackpots: Power, Extra Power, Super Power and Ultimate Power. Jackpot games can be awarded randomly after any spin. The values do vary with bet size, the higher a bet, the more chances of winning. On the screen a 4×5 grid with 20 squares will appear – the aim is to match 3 symbols with the Power, Extra Power, Super Power or Ultimate Power jackpots.

The Autoplay option gives the choice up to 99 spins. Hover with the mouse over the Auto Play button to display the list of options. Select the amount of spins to be played automatically or select the ‘Until Feature’ to spin until the Bonus round or Jackpot is triggered. Or choose to click ‘Stop to end the spins.

Where to play Age of the Gods – Fate Sisters

You can play Age of the Gods – Fate Sisters pokie game at our recommended Playtech Internet casinos below. 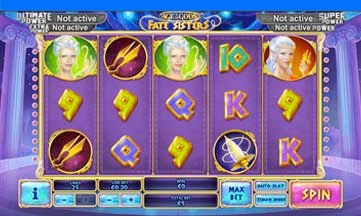 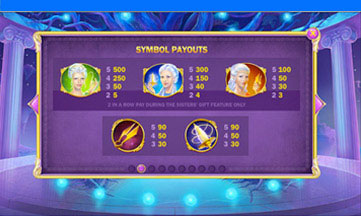